December means, for many, that Christmas is coming. It means family get-togethers, delicious food, and (sometimes) overeating. Now, we all know that Italy is famous for its delicacies, but maybe you might not be aware that Italian traditions for Christmas time are also very interesting, and yummy! The most amazing thing is that despite being such a small country, Italy’s regional differences in terms of traditional food are apparent even for these kinds of traditional meals.

Every region, sometimes even every specific city has something traditional that is different from other parts of the country when it comes to setting the Christmas menu. This article is about three of the traditional Christmas cakes in Italy, if those sounds delicious to you, they are just the beginning!

The typical Christmas dessert of the city of Bologna is called “Certosino”. It is part of those types of desserts that in Italy are known as “panforte”, literally “strong bread” because they can be enjoyed only after a long preparation time and some “resting periods”. Those resting periods are essential for the dessert, that needs to be prepared before the middle of November to be eaten at Christmas.

This dessert is a long tradition, dating back to Medieval times. The Certosino is a dessert that is made out of flour, honey, raisins, and almonds. Despite the ingredients sound quite simple, the preparation is quite difficult. However, you can buy Certosino in Bologna in almost every bakery in the city, do not forget to try it out! 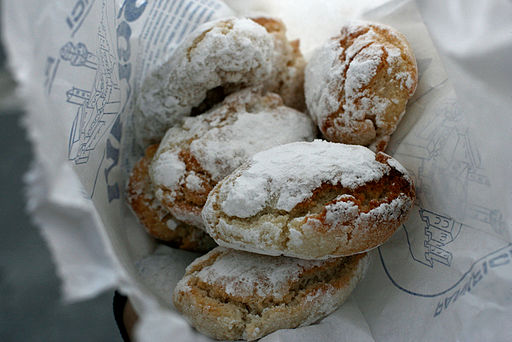 Tuscany, or better, the city of Siena has a different dessert that cannot be missing on local Christmas dinners. This dessert is called “ricciarelli”, a sort of biscuits (but calling them like that is rather diminishing) made or almond flour, eggs, and sugar. They are eaten at the end of the meal, usually accompanies by some vin santo (sweet wine) or amaretto.

The preparation of this dessert is quite long and tedious, but the final result is so yummy, you will never get enough of this wonderful dessert! The origin of this dessert can be found in the 15th century, where almond paste in the form of marzipan was very popular. If you are in Tuscany around Christmas time, you’ll easily find ricciarelli in every bakery or food-related shop. Just give them a try and you’ll quickly fall in love with this delicacy!

This is the king of Italian desserts when it comes to Christmas. I know we said that each region has its specialty, but Pandoro is just so yummy that it is the dessert that really will be present in every Italian house for Christmas dinners and family meals. Soft and simple, it is loved by everyone. The secret of its delicious taste lies behind the apparent simplicity of this dessert. Its dough is very soft and golden-colored because of the eggs, and biting on it, not only you’ll love the texture, but also, you’ll discover a wonderful flavor of vanilla.

The shape of Pandoro is traditionally conical, with edges that resemble a star, usually with eight points.

It is really hard to make a good Pandoro at home, but the good news is that Pandoro is so popular you will be able to find it everywhere! Traditional brands are making them industrially, such as “Bauli” or “Melegatti”, or you can also find artisanal pandoro in many bakeries. No matter what you choose to buy, trust me, you’ll love it!

The origins of this Italian traditional Christmas dessert do not come from the country, In reality, it seems that Pandoro was first originated in Austria, where it was called “Vienna’s Bread”. Today, the name Pandoro means “Golden Bread”, and it will probably be one of the tastiest desserts you’ll ever try for Christmas.

Here was a brief list of some of the most popular Italian desserts for Christmas time. As we’ve already mentioned, Italy is a very interesting country, not only for its amazing and strong culture but also for its diversity. With that, it means that wherever you are in Italy, you might find some different traditions. In any case, you should try everything you can, as Italian food is rarely not satisfying!